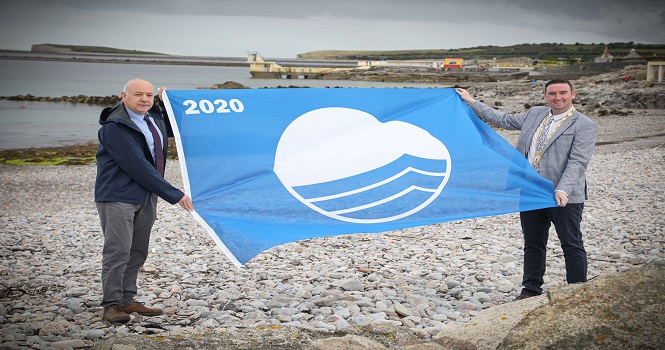 Pictured at the raising of the Blue Flag is Mayor Mike Cubbard with Dermot Mahon, A/Director of Services

An Taisce, the National Trust for Ireland, has awarded the prestigious Blue Flag and Green Coast Awards to two Galway City beaches.

Galway City Council is delighted to have been awarded International Blue Flag Awards and the National Green Coast Awards for both Salthill and Silverstrand Beaches for the 2020 bathing season.

On Wednesday 10th June at Salthill, the Mayor of Galway, Cllr. Mike Cubbard formally raised both flags for the two beaches in the city. He expressed his delight at this event, and thanked all staff for their work and commitment in achieving this status for the city. The benefits of having Blue Flag beaches will be seen throughout the summer season, with the influence of tourist and locals who can enjoy having world class beaches.

The Blue Flag is operated in Ireland by An Taisce on behalf of the Foundation for Environmental Education (FEE). The Blue Flag is one of the world’s most recognised eco-labels. Beaches and marinas that achieve this award must meet criteria relating to water quality, information provision, environmental education, safety and beach management. At beaches, the bathing water must comply with the excellent standard in accordance with the 2006 EU Bathing Water Directive.  The Blue Flag for beaches is only valid during the official bathing season and for one season at a time.

The Green Coast Award recognises beaches of high environmental quality. The award is for beaches which have excellent water quality, but which are also prized for their natural, unspoilt environment. Green Coast sites must be managed in partnership with the local community to be considered for this award.

Galway City Council would like to remind people to play their part and help retain the Blue Flag or Green Coast beach status for next year, by keeping our beaches litter-free when visiting over the summer period.