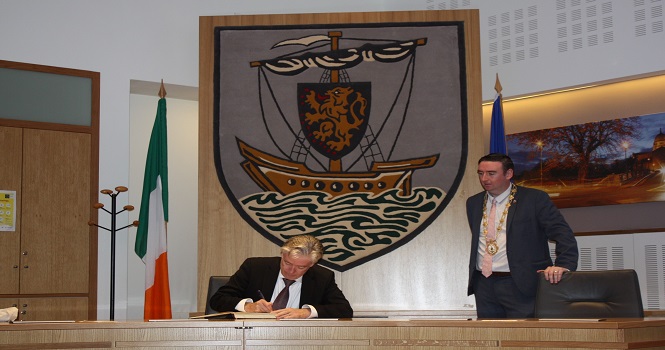 Australia’s Head of Mission (HOM) to Ireland, Robert Owen-Jones has been on a recent visit to Galway to build an understanding of the business and cultural case the region offers to Australian business and Foreign Direct Investment.

Galway, according to HOM, Robert Owen-Jones appears unique in the way in which it has safeguarded culture while developing its now world-renowned MedTech and ICT offerings.

Full statement can be found below:

Galway’s approach to the promotion and protection of Irish culture and its partnership with business is a lesson to the world in how to safeguard the arts while creating investment and economic growth, according to Australia’s Head of Mission, Robert Owen-Jones who visited the city as part of a regional engagement programme.

Much of the work undertaken for Galway 2020 hopes to reimagine culture as a living element in modern Ireland while acknowledging the significant influence that traditional music, dance and language have on that future and it was the work done in the protection of those key factors that Owen-Jones seemed most impressed.

Commenting Robert Owen-Jones said, “The longstanding commitment and determination to see the development of culture in this region has been truly remarkable. Not only in the promotion of new and upcoming artists, but in the protection of rural and more traditional Irish culture in a way that respects their unique history while maintaining the development of a modern and outward-looking city.”

“Australia has always had a special relationship with Ireland and we recognise the contribution to Australia from Irish figures such as explorer Robert O’Hara Burke from Craughwell who led the first expedition from Southern to Northern Australia back in 1860. These natural connections as well as a shared culture and worldview has made many of our largest businesses and investors choose Galway as their Irish and consequently EU base as they look for viable and long term investment in the region.”

Owen-Jones’ comments come at a time when the Australian Government are currently in talks with the European Union on what grounds a comprehensive trade deal could be established between the two regions. Australia has one of the world’s largest economies and significant Medtech, agriculture and services sectors. This, according to Robert Owen-Jones is of central importance to many of Australia’s largest organisations seeking to establish a base in the European Union and capitalise from whatever agreement is eventually reached between the two.

Robert continued, “Galway has shown ambition in becoming a global hub for Medtech, Pharmaceuticals and Fintech and businesses looking towards the European Union are increasingly looking towards Ireland and to Galway. Already in the city we have major investment from Australia with EML Payments, Siteminder and Vale Research Life Sciences all contributing significantly to the regional economy and this is a trend that is likely to continue.”