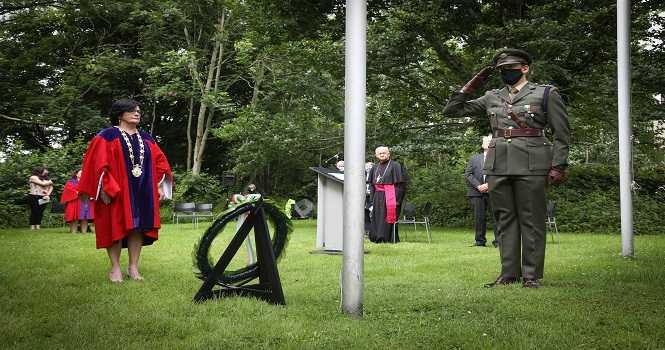 The National Day of Commemoration Local Ceremony for Galway City, honouring all those Irish men and women who died in past wars or on service with the United Nations Peacekeeping Missions, was held on Sunday July 11th 2021 at City Hall at 11am.

The Ceremony was attended by Elected Members of Galway City Council, as well as members of the Defence Forces and religious leaders.

The Ceremony included an invitation to remember all those who died in past wars or on service with the United Nations, as well as those who died during the War of Independence. The Truce which came into effect on 11th July 1921, 100 years ago today, was also recalled. This was followed by multi-faith prayers of commemoration.

Mayor of the City of Galway, Cllr. Colette Connolly, laid a wreath to honour those who died in past wars or on service, at home or abroad and this was followed by a minute’s silence.