The Minister for the Environment, Climate and Communications, Eamon Ryan T.D., has announced a public awareness campaign on the ‘ABC’ of Cleaner Air this Winter.

For this heating season, people are being asked to focus on three simple steps – to bring about better air quality and improved health for all by reducing air pollution from domestic fires during the winter ahead.

This campaign centres around three core messages – the ‘ABC’ for Cleaner Air. These can help to bring about significant improvements in air quality:

A – Ask yourself: “Do I need to light a fire?” Use other cleaner heating sources instead if possible.

B – Burn cleaner, more efficient, low smoke fuels and make sure you use the right fuel for your appliance.

C – Clean and maintain your chimneys and heating appliances at least once a year. 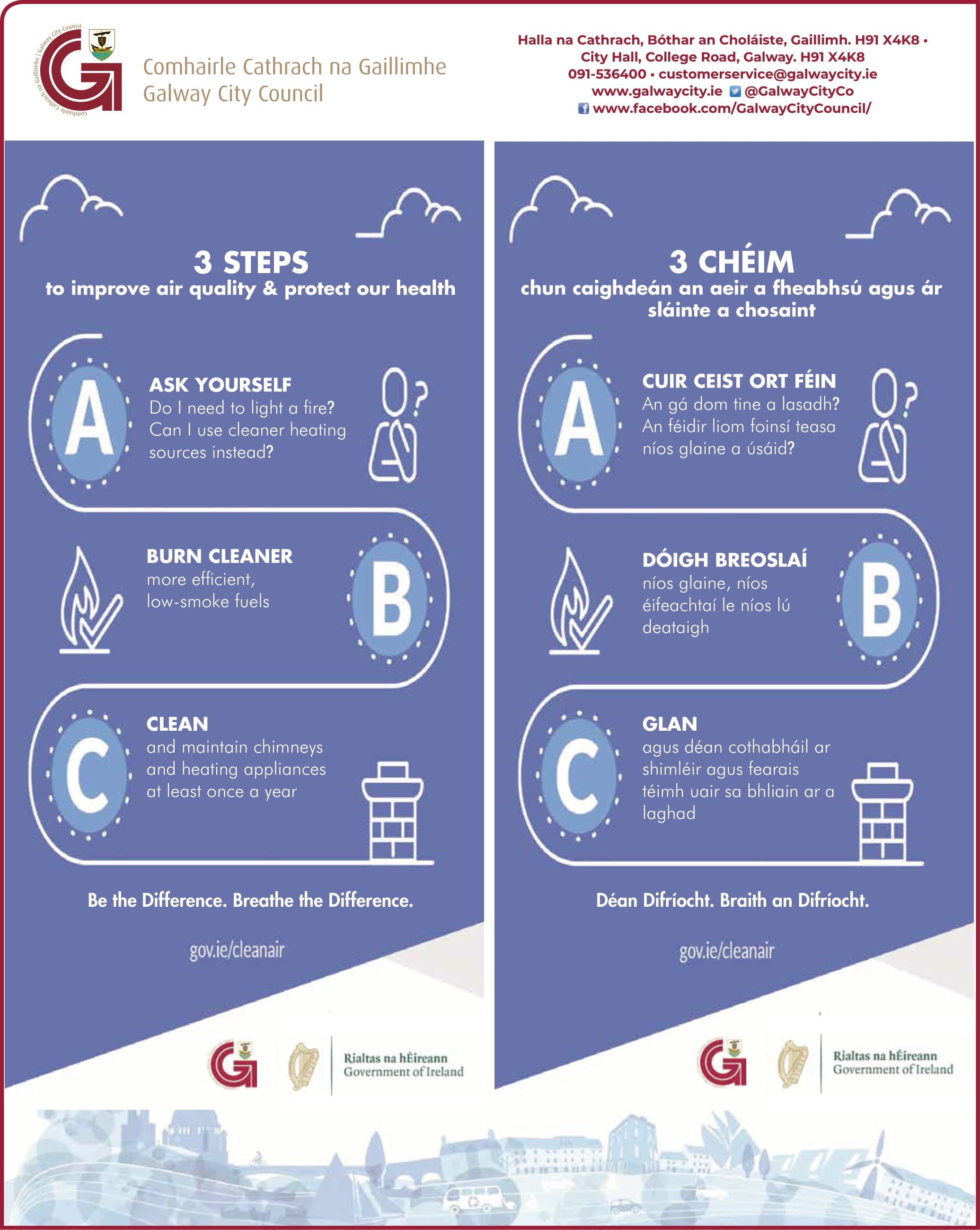 Home fires are the main source of an air pollutant called fine particulate matter (also known as PM2.5). This pollutant is linked to approximately 1,300 deaths in Ireland each year. By taking these simple steps, people can help to safeguard the health of people who are at particular risk of problems caused by air pollution, such as people with asthma, children and the elderly.

The awareness campaign is being launched ahead of the introduction of the new Solid Fuel Regulations that will come into place for 2022 heating season. Up to now, there were rules covering low smoke coal in some cities and towns across the country but not all. The new rules will apply nationwide and to a broader selection of fuels.

Minister Ryan said: “When this Government was formed, we gave a commitment to tackle air pollution caused by domestic solid fuel burning, and we remain committed to doing so. We took a major step earlier this year, with a public consultation on the development of new solid fuels regulations for Ireland.

We received more than 3,500 responses across all strands of the consultation, with a wide variety of suggested regulatory approaches for solid fuels. Having considered the submissions made by the public, health experts and advocacy groups, academia and industry, a framework for legislation has been developed and drafting of the regulations is underway. Our goal is to improve public health by ensuring that people switch to lower smoke rules and that the market is regulated nationally.”

The awareness campaign is being launched ahead of the introduction of the new Solid Fuel Regulations that will come into place for 2022 heating season. Up to now, there were rules covering low smoke coal in some cities and towns across the country but not all. The new rules will apply nationwide and to a broader selection of fuels.

From September 2022, the following new standards for solid fuels will apply in Ireland:

·        Coal, coal-based products, any manufactured solid fuel or peat briquettes will be required to have a smoke emission rate of less than 10g/hour, reducing to 5g/hr by 2025.

·        It is not proposed to make any changes to the smoke emission rate for biomass products (that contain coal), as this is already set at 5g/hr.

·        Wood sold in single units under 2m³ will be required to have a moisture content of 25% or less (moving to 20% within 4 years) and wet wood sold over these volumes will be required to come with instructions for the purchaser on how to dry this wood.

·        In order to accommodate those with rights to harvest sod peat, no ban on its burning will be introduced. However, a regulatory regime to reduce its harm in more urbanised areas is under examination.

These regulations will be finalised in the coming months and will be in place for the 2022 heating season. They have already been announced to allow those servicing the domestic solid fuel market to plan accordingly and to continue to invest in less polluting alternatives.